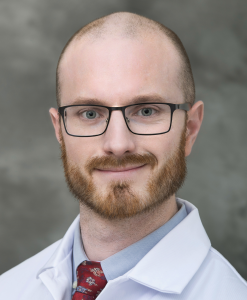 Adam was born in Salt Lake City, Utah, where he lived until moving to Rochester, New York for high school. He obtained his B.A. in Molecular Biology from Colgate University in 2009, where he worked on Reoviruses under Dr. Geoff Holm. During his time at Colgate, Adam participated in Colgate’s NIH-exchange program, studying Influenza A Virus pathogenesis in the Laboratory of Viral Diseases at the National Institutes of Health under the mentorship of Drs. Jonathan Yewdell and Scott Hensley. Adam joined the Medical Scientist Training Program (MSTP) at the University of Wisconsin-Madison School of Medicine and Public Health (UWSMPH) in 2010, earning a Ph.D. in Molecular Pathology in 2015 for his studies of primate Pegiviruses and Arterivirus in the laboratory of Dr. David O’Connor. In 2017, Adam joined the Physician-Scientist Training Pathway (PSTP) in the Department of Pathology & Immunology at the Washington University in St. Louis School of Medicine (WUSM) and Barnes-Jewish Hospital where he completed his medical residency training in Clinical Pathology in 2020. At WUSM, Adam contributed to advances in viral diagnostics and total-laboratory automation in the clinical microbiology laboratory under to mentorship of Drs. Carey-Ann Burnham and Neil Anderson before joining the laboratory of Dr. Michael Diamond as a Post-Doctoral Fellow, where he contributed to the fight against COVID-19 developing SARS-CoV-2 diagnostics, animal models of viral pathogenesis, and in vitro systems of infection. As a Post-Doc Adam also developed several independent lines of investigation blending his clinical and research background to develop new models of viral hemorrhagic fever, for which he was awarded the NIH Director’s Early Independence Award (DP5) in 2020. Adam joined the Department of Pathology & Laboratory Medicine at UWSMPH as Associate Professor in 2021, where he helps direct the clinical laboratories at the University of Wisconsin Hospital and runs his own research laboratory focused on viral pathogenesis, zoonosis, and medical countermeasures.

Adam is married, has two daughters, and a dog. He enjoys skiing, hiking, classic rock, military history, and the occasional beer at the Union Terrace.